Legend has it that in 1409 AD, near Govardhan hill in Mathura an image of Lord Shrinathji, the mountain lifting form of Lord Krishna, was discovered while a cow worshiped the lord with offerings of milk. A temple was promptly established at this site and was held in high reverence.

In the 17th century, during the oppressive rule of Mughal King Aurangzeb, who was against idol-worship, Hindu temples were being destroyed mercilessly. In order to protect the idol of Lord Shrinathji that was worshiped at Govardhan hill near the sacred city of Vrindavan, it was to be moved to Rajasthan, where it would be safe under the Rajputs. And so the journey of the idol began with the lord’s sevaks – the priests, halwais (confectioners), cows and their caretakers and Pichwai painters (who would paint the temple background art) in tow.

It was first taken to Agra for 6 months and then was taken further south. At one point during the journey through the state of Rajasthan, near the village Sinhad, the wheels of the cart that was carrying the idol got stuck in mud. Even after a lot of effort, the cart could not be pulled out. This was taken as a signal from the gods, and a temple of Shrinathji was established in this city of Nathdwara, meaning ‘the gates to the lord’.

But this city has more to offer than just the Shrinathji temple. This tiny city is also famous for its ‘Pichwai’ paintings, where the word pichwai literally means ‘that which is hung at the back’. These are a form of cloth paintings from the school of Nathdwara of Mewar style paitings. The central theme of any Pichwai is Lord Krishna, in various contexts from his life and always in the form of his childhood incarnation of Lord Shrinathji. Identified by characteristic features of large eyes, a broad nose and a heavy body, these were traditionally made for temples, to adorn the wall behind the shrine. 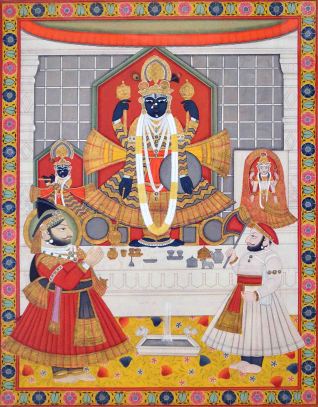 Different paintings are made for different occasions, seasons, festivals and so on. While some have pink lotuses signifying summer, some are night scenes with a full bright moon signifying the occasion of Sharad Purnima. Raas Leela, the festival of Holi, Annakut (Govardhan puja) are commonly employed themes by Pichwai artists. 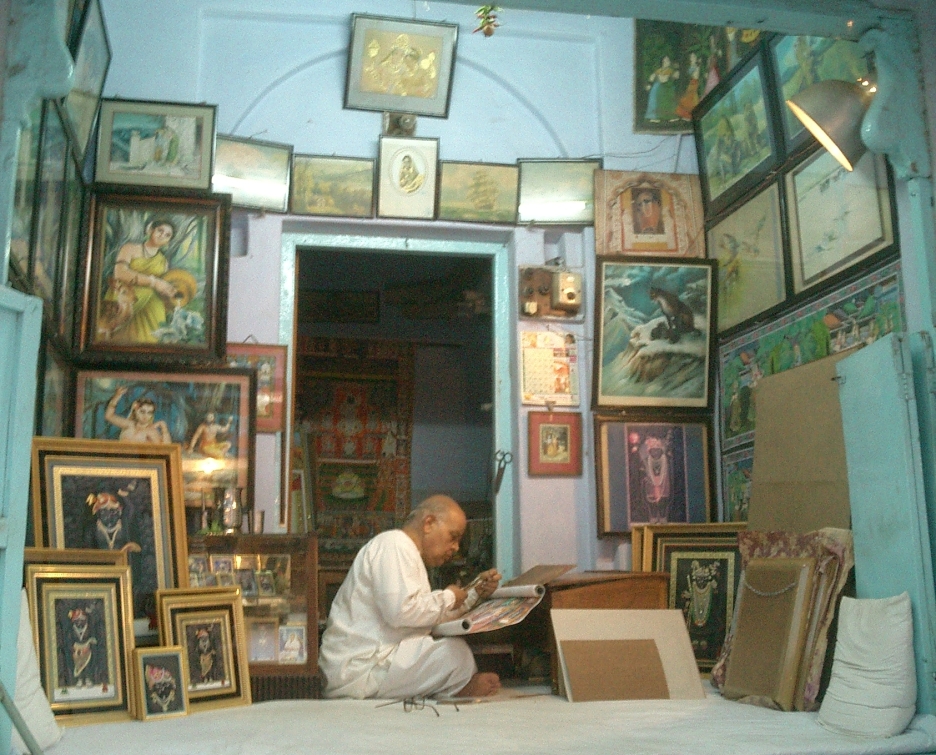 Traditional paintings saw the use of rich embroidery or appliqué work with dark borders. The color palette is comprised of intense reds, greens, yellows, blacks and whites with heavy use of gold for decoration. Older paintings used pure gold that added to their value and charm, and stood as a testimony to the unparalleled charms of the beloved Lord Shrinathji!

Shop for a collection of Pichwai paintings and more here.

Images from here and here.