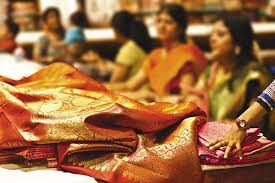 Distinguished by its wide contrast borders and rich motifs, a traditional Kanchipuram (or Kanjeevaram) saree is a sight to behold. Deriving its name from the town of its birth, a Kanchipuram weave has long been a treasure of the southern Indian state of Tamil Nadu.

Located about 72km from Chennai, Kanchipuram gained eminence during the reign of Krishnadeveraya, a 16th Century emperor of the Vijayanagara Kingdom. It is during this period that two weaving communities, the Devangas and Saligars are believed to have migrated here from Andhra Pradesh.

They were experts at weaving silk sarees and legend has it that they were descendants of Sage Markanda, a master weaver who is believed to have woven tissue from lotus fibre. The pattu-nool (thread) came from Karnataka while the zari travelled here from Surat. Families often wove together, as several hands were needed to wind the thread in the beam. Sarees were bought by temples to drape goddesses and kings purchased them for the boudoir. Tourists visiting the temple also bought them as blessed mementos. From Kanchipuram, the sarees often made their way to Chennai (erstwhile Madras), the wealthy trading centre of the times.

Given the sheer magnitude of colors, textures and designs of a Kanchipuram silk saree, they can take anywhere between ten days to almost a month to create. The procedure begins with preparing the thread to be used on the loom. This involves twisting the thread before dyeing and drying it in the sun.

The weaving of a Kanchipuram saree requires the use of three shuttles and the weaver and his aide work on the two sides. The color and design of the border is usually quite different from the body. In its most traditional form, the pallu is woven separately in a different shade before being delicately joined to the saree. The part where they meet is often denoted by a zig-zag pattern.

Motifs in the Kanchipuram saree vary between those borrowed from nature such as sun, moon, chariots, peacocks, parrots, etc. or those based on temples, palaces and paintings. Other common motifs include the mallinaggu, a jasmine bud within a round or square frame. Another is Thandavalam where parallel lines run across the body of the saree. One can even see scenes from the epics Ramayana and Mahabharata represented on the saree. In addition to the motifs, the saree is ornamented with pure gold zari.

The rich weaving traditions of Kanchipuram silk sarees and the unique motifs that decorate them are a testament to the ageless allure and grandeur of this silken weave, which belongs in a bridal trousseau as much as it does in a connoisseur’s treasure trove.