She works the livelong night,
As if the quilt her poet were
Of her bereaved plight.
Many a joy and many a sorrow
Is written on its breast;
The story of Rupa’s life is there,
line by line expressed.”

The word Kantha simply means ‘rags’. It was born as an art of recycling, practiced by Bengali women for centuries. Old clothes like soft dhotis, worn out saris, instead of getting thrown away, would be kept layer upon layer and get sewn together to create something new. The functional kantha dorokha (two-sided quilt), was never intended as work of art, but simply what the poor families used to keep them warm.

Born out of her love for her family, a woman would spend months to make a kantha for her loved ones, her children, her husband, her parents. The earliest mention of Bengali kantha is found in the 500 years old Krishnadas Kaviraj’s Sri Sri Chaitanya Charitamrita, where he refers to a kantha sent to him by his mother. [Manjari Mohanty, “Quilt (Kantha) Art of Bengal”]

More than just a functional quilt, Kantha is the physical manifestation of a woman’s creativity and spontaneity. Over time, it evolved into an elaborate craft of Nakshi Kantha. Most Kantha was made by illiterate women with unconditioned, intuitive minds, who would end up stitching stories into their quilts. Often they would stitch in their own stories, which would then take years to complete. The same kantha is known to have been worked on by a grandmother, mother and daughter. The embroidered motifs reflect a woman’s desire for happiness, marriage, fertility, the longing for her husband, her insecurities. It became a lifelong friend to whom she could tell all. She would then ‘autograph’ her creation with her name or her relationship with the person for whom the piece was created. 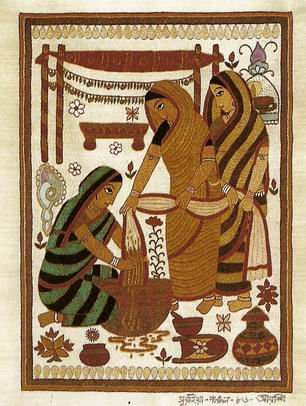 Nokshi Kanthar Maath, is a Bengali poem written by the master poet and song-writer Jasimuddin. It is a poignant folk tale that centers around a peasant ‘Rupai’, who falls in love with a girl ‘Saju’ from the neighbor village, and marries her. But soon a bitter sequence of events force Rupai to flee, leaving his hearth and home. The young wife waits everyday with bated breath, longing for her beloved, and eventually pines away to death. She captures the story of her life, from a happy childhood to a tragic end, on a Kantha quilt. The award winning poem has been translated into many languages. Following is a verse from the English translation of the same, ‘Field of the Embroidered Quilt’ by E.M. Milford that was published in 1928.

She is a daughter beloved at home
When the embroidery begins;
Later a husband sits at her side;
Her red lips hum as she sings.
The self-same quit today she opens,
But those days ne’er return;
Those golden dreams of joy have vanished,
To ashes grey they burn.
Stitch by stitch she carefully draws
The last scene of pain,
The farewell of Rupa, slowly going,
Then turning a little again,
At the door his peasant wife
Standing dishevelled, gazing at him,
Who is going to leave her for life.
She wept upon the careful stitches,
That last scene shown so well.
Her face turned pale as ashes
Down in the quilt she fell.
In this way many days have passed,
Carrying unbearable pain;
At last came the tempest that smote the trees;
Her body broke with strain…

(Shaju tells her mother)
Wipe your eyes and listen to me mother,
On the floor my quilt outspread,
Propped on pillows, let me hold once more
The needle and the thread.
The pale hand take the needle,
And stitch by stitch she works;
Contemplating the design completed,
Wiping the tear that lurks.
She has drawn her tomb upon the quilt,
A shepherd stands beside;

Dark night there sits like one bereaved
From the grave a little aside,
Playing a flute, while the ceaseless tears,
Are falling from his eyes.
She draws according to her fancy,
She looks and looking cries.
Weary and calling her mother, she says,
This quilt on my grave shall be spread;
The morning dew will weep on its breast
When I am dead.
And here if he ever returns again
His tears may break the sleep of death,
I may rise at night from the ground,
How will he bear this pain, mother,
On this quilt lies all of mine;
All my pain and ·all my grief,
Embroidered line by line.
So lay it on my grave, mother,
This picture of my grief,
That his and mine upon its breast,
May mingling find relief.

From ‘Field of the Embroidered Quilt’ by E.M. Milford