They say, you are what you eat. Then why not make each meal count? We bring you a list of 10 natural ingredients that can do your body a whole lot of good if included in your daily diet.

Panchphoran, literally, ‘five spices’, is a whole spice blend used mostly in Bangladesh and Eastern India. Typically, it is a colourful blend of flavourful seeds: the green of fennel seed, black mustard and nigella seeds, golden fenugreek and buff-coloured cumin seeds. This mixture provides a lovely aroma and adds depth and flavour to every dish it is cooked with.

Peanuts can be a healthy snack or the perfect side-dish to many a meal. Peanuts are rich in energy and contain nutrients, minerals, antioxidants and vitamins that are essential for optimum health. They are also known to lower bad cholesterol and increase good cholesterol in the body due to the presence of mono-unsaturated fatty acids especially Oleic acid that prevents coronary diseases. However, peanut allergies abound and it is best to consume these only when one is sure of their effect on the unique body type.

Sesame seeds are an excellent source of copper, a very good source of manganese, and a good source of magnesium, calcium, phosphorus, iron, zinc, molybdenum, and selenium. This rich assortment of minerals translates into relief for Rheumatoid Arthritis and better Vascular and Respiratory Health. 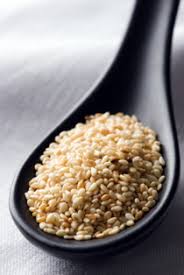 Amaranth, meaning ‘everlasting’ in Greek, has been cultivated as a grain for nearly 8,000 years. The yield of grain amaranth is comparable to rice or maize. It was a staple food of the Aztecs, and was used as an integral part of Aztec religious ceremonies. Amaranth grain is particularly high in lysine, an amino acid found in low quantities in other grains and thus it is good when consumed with other grains. It is especially significant for being free from gluten and thus can be consumed by those suffering from gluten allergies.

Flaxseeds are considered by many to one of the most powerful foods in the world. It is known to contain Omega-3 essential fatty acids, “good” fats that have been shown to have heart-healthy effects. It also contains Lignans, which are known to have both antioxidant and plant estrogen qualities. Flaxseed contains 75 to 800 times more lignans than other plant foods. Flaxseed are considered to be rich in fiber.

Jaggery, or Gud in Hindi, is rich in Iron and has a low glycemic index than table sugar making it a low guilt yet super tasty sweetner.

Awla is the humble Indian Gooseberry which is used extensively in Ayurveda, Siddha and Unani preparations as a tonic and for diarrhoea and dysentery. Being a fruit with a high value of vitamin C, a spoonful of awla powder either on its own or mixed with water or honey is full of goodness at anytime of the day.

Bajra or Pearl Millet, is a humble food item that has been eaten in India since the pre-historic times. It is mostly consumed in the form of chappatis or khichdi, especially in the winters. Eating bajra provides us with disease fighting phytochemicals that lower cholesterol and contain antioxidants, fibre, magnesium, copper, zinc, folate, iron, , thiamine, riboflavin, vitamins-E and B-complex,  and niacin. It is a gluten free grain. So it is one of the grains which can be easily included in the diet of a person who is suffering from Gluten Induced Enteropathy or has allergy towards gluten. It is noted for its high iron content also.

Ginger, the wonder spice, finds a pride of place in Indian cuisine with rich doses of it being present in the morning and evening tea, when it isn’t sitting on the side of leafy vegetables. Ginger is known to stoke an appetite when needed, even as it improves absorption and assimilation of essential nutrients in the body. It is also known to clear the circulatory channels of the body or work its anti-inflammatory magic.

Jowar, or Sorghum, or White Millet is a cereal grain native to Africa. Jowar kernels can be steamed, added to soups, boiled or ground into a flour that can be used as a substitute for wheat flour in baked goods. Jowar is a gluten-free, cholesterol-free, high-protein source of a variety of essential nutrients, including dietary fiber, phosphorus, iron, phosphorus and thiamine.

The next time you’re looking for a healthy fix that also tickles your taste buds, you can turn to nature’s best and the goodness it has to offer!