Summer comfort is defined by light, airy fabrics that breathe. This role often rests on the shoulders of the simple yet sophisticated cotton that is often referred to as “the fabric of our lives” and for good reason. We come in contact with it in varied forms in our daily lives and it has remained the fabric of choice for millions across the globe.

Five to seven decades ago, most of the cotton cultivated in India was short staple indigenous (swadeshi) organic cotton with little or no use of toxic chemicals in its production. Even today, there are many pockets in India, where it is produced without the use of agrochemicals.

However, the more widespread chemical methods of cultivation have posed serious environmental threats to workers and end users, prompting the resurgence of organic forms of production and increasing the demand for organically cultivated, eco-friendly or ‘green’ cotton.

Cotton and the Environment

In many countries like India, cotton is still hand-picked; therefore anyone working in cotton fields is exposed to extreme amounts of toxic chemicals. The chemicals can also affect others in the community once these have seeped into the water supply. With so many products made from cotton, we are all exposed to these chemicals at some point. The health risks of pesticide exposure include birth defects, reproductive disorders and weaker immune systems.

Chemical cotton is cultivated on 5% cultivable land and consumes 54% of total pesticides used in Indian agriculture, and in some pockets, the rates are higher than this, leaving immense ecological and human hazards as reported by World Health Organisation.

Use of chemicals at such scale causes environmental pollution, damage to soil health, agro-ecology and poor profitability in cotton farming. 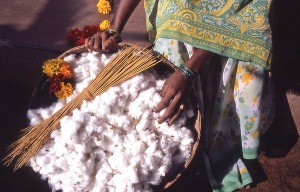 The region in India with the highest level of farmers suicides is the Vidharbha region in Maharashtra, with 4,000 suicides per year, 10 per day. This is also the region with the highest acreage of Monsanto’s GMO Bt cotton. Monsanto’s GM seeds create a suicide economy by transforming the seed from a renewable resource to a non-renewable input which must be bought every year at high prices.

The new Green Revolution is genetically engineered crops, and these are causing even greater damage. Renowned scientist and environmentalist Dr.  Vandana Shiva of Navdanya explains, “The areas where (genetically engineered) Bt cotton is the most concentrated is where there are the highest rates of farmer suicides. From 1997 to 2007, more than 182,000 Indian farmers have committed suicide due to crop failures and excessive debt from purchasing expensive pesticides and GM cotton seed. Bt cotton is also destroying soils” says Dr. Shiva, citing a statistic highlighting that it has destroyed 26% of microorganisms in the soil.

Indigenous cotton varieties can be intercropped with food crops. Bt-cotton can only be grown as a monoculture. Indigenous cotton is rain fed. Bt-cotton needs irrigation. Indigenous varieties are pest resistant. Bt-cotton, even though promoted as resistant to the boll worm, has created new pests, and to control these new pests, farmers are using 13 times more pesticides then they were using prior to introduction of Bt-cotton. And finally, Monsanto sells its GMO seeds on fraudulent claims of yields of 1500/kg/year when farmers harvest 300-400 kg/year on an average. High costs and unreliable output make for a debt trap, and a suicide economy.

Corporations prevent seed savings through patents and by engineering seeds with non-renewable traits. As a result, impoverished peasants have to buy new seeds for every planting season and what was traditionally a free resource, available by putting aside a small portion of the crop, becomes a commodity. This new expense increases their debt burden, pushing them even further down into poverty. Farm proceeds are inadequate for paying off debts and farmers are then compelled to sell a kidney or even commit suicide.

The suicide economy of industrialized, globalised agriculture is suicidal at three levels – it is suicidal for farmers, for the poor who are deprived of food, and at the biodiversity level as it destroys natural capital of seed, soil and water on which our biological survival depends.

Seed monopolies rob farmers of their livelihood and life. Seed is a common resource and we have to protect it for future generations.

Organic Cotton is a non-allergic, comforting, 100% plant-derived, soothing fiber with high absorbent properties. This non-irritant fiber has wide medical and industrial uses, is healthy and environment-friendly. Even the Organic Cotton Seed Oil, a byproduct of Organic Cotton, has wide uses in snacks and as feed for livestock. Additionally, organic cotton farmers enjoy the benefits of better working environment in small-scale settings and not having to spend on large amount of pesticides. Farmers who switched to growing organic cotton earn nearly ten times more than they did growing Bt cotton, according to research conducted by Dr. Shiva as part of her work at Research Foundation for Science, Technology and Ecology (RFSTE).

As farmers continue to avail the multifarious benefits of cultivating organic cotton, it is now upto the design conscious consumer to lend their support to environment-friendly practices by inviting this fabulous fabric into their wardrobe.

The Desi Organic Kumbha collection by Vriksh is a small attempt to initiate a dialogue on healthy and environmental alternatives for clothing that India’s indigenous and rural communities have offered for centuries.

Shop for this collection on http://www.jaypore.com