References to Central Asia conjure up images of flat, rolling sandy deserts and a vast arid landscape. However, upon closer look it throws up colors so vivid that the eyes are mesmerized by their distinctive beauty. The vibrancy of an Uzbeki ikat robe or wall hangings adorning a carved door does justice to their name. In Persian, ikat is called ‘abr’ or ‘cloud’, as these are considered the wondrous reflection of clouds in still water, a much needed refuge from the heat and aridity of the parched landscape.

Ikat is a weaving style where threads are resist-dyed on either the warp or weft before they are woven to create a pattern or design. While ikat has been practiced for centuries in many parts of the world, it was in the 19th Century that it reached its zenith in Central Asia. Ikat making in Central Asia was largely centred in Bukhara and Samarkand in modern-day Uzbekistan, and Kunduz and Kabul in Afghanistan as these lay along the trade route between China and the Mediterranean.

Here ikat making was a cooperative endeavour employing several members of the family and groups of people from diverse backgrounds. While women tended silkworms, it was mostly men who worked on the looms. These ikat fabrics were used as markers of status in clothing or as hangings within homes.

Traditional Uzbek ikats were used to denote wealth, status, prestige and power.  Even poor members of the society could be found with tattered pieces of ikat on their outfit, still noticeable in old photographs of dervishes. Within and along the borders of Central Asia, silk and cotton ikats had social and political value, being used in diplomatic exchanges, gifts to monarchs, in lieu of payment for services rendered and even as dowry. The bold originality of the designs of ikats was considered to symbolise the mystical Islamic world. 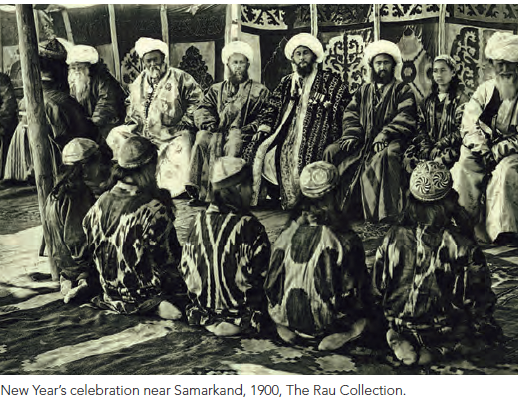 This rugged region of desert and steppe celebrated its unique form and style before Russian rule and industrialization transformed these areas.

Even today, rich silk ikats, the national fabric of Uzbekistan, are a reminder of the textile glory of Central Asia.

The imaginative design and vibrancy of this fabric lends itself to brightening up a modern home or stylish wardrobe. And the unparalleled beauty of this textile tradition continues to lure collectors, textile historians and art lovers, who wish to preserve it for many years to come.