“The design laid down in the patola may wear out, but it shall never fade.”

True to this ode to its beauty, a Patola is a coveted silken textile that is believed to have been woven since the 4th century AD. According to historians the weaving was certainly known in the 7th Century as the details in the sculptures at Ajanta Caves resemble the tie-dye technique of Patola.

A testament to its glory is its mention in religious texts like the Ramayana and Narsinha Puran that refer to its being a special part of wedding ceremonies. It was also named “stridhan”, a jewel to be carried in the bridal trousseau. This craft form is believed to have received great patronage during the Chalukya period, and it is said that the Queen of King Kumarpal wore a new patola every day.

The patola is woven on a primitive hand operated harness loom made out of rosewood and bamboo strips. The loom lies at a slant, with the left side being lower than the right side. The bamboo shuttle is made to move to and fro through warp shades. Each weft thread is thoroughly examined and matched with each part of the warp design pattern while weaving. 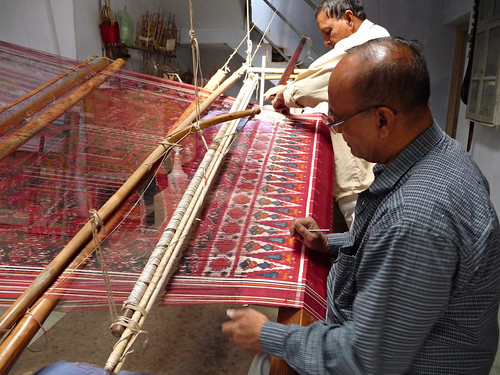 Warp and weft silk threads are tied separately with cotton thread on the portions already marked out in conformity with the proposed design in the fabric. This tied portion is meant to remain unexposed to the colour while dyeing. United portion which has absorbed one colour, may be tied while dyeing in another colour. Tying untying, retying and dyeing in different shades are the main features of this process.

After completion of dyeing work of warps & wefts, the threads of the warp of different repeats of a pattern are put together in a sequence on the loom, so that the design becomes visible. The threads of wefts are wound on to bobbins and kept in the bamboo shuttle for weaving process.

An interesting feature of a Patola is that both sides of the fabric have equal intensity of color and design and thus there is no ‘reverse’ side in this textile! Also, the elaborate patterns ensure that one saree takes anywhere between 6 months to 1 year to prepare.

Today there are only three families keeping alive the centuries old weaving tradition of a Patola in Patan, North Gujarat. Among them is the Salvi family who have been awarded the National Award, the UNESCO Seal of Excellence and several other heritage awards. They continue to practice the craft with little modification, using hand-twisted silk and resist-dyeing it in natural materials such as Turmeric, Marigold Flower, Onion Skin, Pomegranate rinds, Indigo, among others.

Essentially the motifs on a patola are based on traditional designs such as flowers, animals, birds and human figures.  New geometrical designs using vegetable dyes are also being developed, while it has borrowed from the patterns in Solanki architecture such as those present in the ‘Rani ki Vav’ a stepwell located at Patan.

Once a desirable garb among royalty, this exquisite weave deserves to drape textile lovers for years to come.