“I must share the story of Tabassum with you. She was one of the most highly-skilled artisans in Lucknow. She had won state-level awards. When we started training her as part of the first batch of the Sangraha project, she was very overwhelmed. She broke down and started crying. She said she wasn’t capable of conceptualizing designs. ‘I can’t think,’ she said. In those days she used to earn Rs 2,000 to 3,000 a month implementing designs handed to her by designers and master craftsmen. In the last six months alone, she has earned Rs 80,000.”

There is a quiet sense of pride when designer and academician Jaspal Kalra, founder of the Sangraha Kala Foundation talks about his students – the participants of the project that aims to empower women chikankari artisans from Lucknow by educating them on design, market awareness and costing, thereby making entrepreneurs out of them. Tabassum is only one such success story among many others. There’s Shakila, who helpless and devastated after her husband’s second marriage, was working as a domestic help. She is now the creator of the most exquisite chikankari designs. Often incredulous at how far she has come, she is hopeful that this craft form she loves so much will continue to give her a sustainable income. These women, like Tabassum and Shakila, who had barely moved out of their own homes before they decided to undertake this course, now travel fearlessly for exhibitions and even command a design royalty for their creations.

Narrating an incident that reflects the commitment of these artisans and their drive to make something meaningful out of their lives, Kalra says, “There was an exhibition at Jaipur and some samples got left behind. It was the weekend and we were fairly certain that the products wouldn’t reach Jaipur if couriered. While all of us at Jaipur were wondering what could be done, two of the girls decided they would get on the next train from Lucknow and hand over the samples themselves. “Traveling alone for the first time, using public transport at odd hours, these girls gave us a sleepless night, but they also ensured the products reached us in Jaipur on time.” He adds, “More than educating them on principles of design, it was about instilling a sense of confidence in them…making them believe that there was hope for them,” Kalra says. In order to free the women artisans from the vicious and exploitative cycle, Kalra and his team made sure that the women who complete the course charge fair levels of labour charges, when the standard rate was merely Rs 50. Criticized by many for upsetting the applecart, Kalra says it was “necessary” in order to make the women value their craft.

Trained by some very bright names in the design fraternity, at the end of each course these students are encouraged to start working on their own collection. These collections are judged by an external panel that also engages with them and mentors them. Some of the inspirations behind the collections put out by the students of the first batch were the tree of life, jewelry of Awadh, day and night, mehendi and the like. Once the course is completed, the organization continues to provide them with platforms to market themselves and helps them forge collaborations. 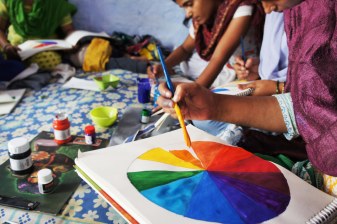 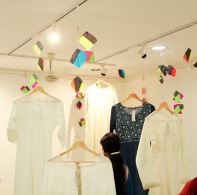 The latest of these collaborations is with Jaypore. With some design direction from the creative minds at Jaypore, the artisans have created a collection that is now available on the website. Jaypore co-founder Shilpa Sharma, who along with textile revivalist Jaya Jaitley, French designer Maximilano Modeste, Laila Tyabji and others was on the panel that graded and mentored the students, says, “They are a talented bunch and Jaspal Kalra’s efforts in making the artisans a step closer to being able to hold their own instead of merely executing others’ vision is commendable. We support this initiative wholeheartedly because at Jaypore, we are committed to working directly with artisan groups and knocking off the middle rung, which is what ends up marginalizing the crafts persons. This goes a long way in helping the artisans get fair prices.”

It’s been a long road for Kalra’s organization, one replete with roadblocks and challenges, and the going hasn’t always been easy. But he is confident that Sangraha is a step in the right direction and that they will see more success.  In Kalra’s own words, “These women are not ready to accept failure…that is why it has to work.”

You can shop for this collection here.

Images via Jaypore and Jaspal Kalra.

Like Loading…
← Beyond the Red Lehenga: The Indian Bridal Story
→ Colors of the Earth: The Allure of Natural Dyes