Once upon a time, the nomadic, pastoral communities of Kutch roamed the salted marshes and the wetlands and traded with others for food and clothing. The roaming Rabaris who were sheep and camel herders supplied the Vankars or the traditional weavers with wool to turn into fabric. The Vankars and their entire families spent days, even weeks on the loom to make the cloth that would then be given to the Khatris who would dye it shades of blue, red or yellow and adorn it with beautiful prints. The Rabaris would then embroider these textiles in vibrant colors and mirrors to use as clothing or home textiles.
These symbiotic chains, rooted in nature, following the mellow rhythm of seasons may have been replaced by a faster pace of life, but the Vankars of Kutch are still at work, spending solitary hours crouched at their wooden looms to keep their own and the region’s cultural identity alive.
In a week-long celebration of Kutch focused on the rich textiles from the region, Jaypore features some of the best known Vankars. Here’s what you should know about who they are and how they turn yarn into magic.

Vankar Dayalal Kudecha
Vankar Dayalal Kudecha, popularly known as Daya bhai used to be a full-time weaver before he decided it was equally important to pass on his skills to the next generation and joined the Bhuj-based Kala Raksha as a faculty member. Working with Judy Frater, the founder of Kala Raksha, Daya Bhai develops designs for products that use the traditional arts and crafts of Kutch, presenting them in fresh avatars. He continues to run his business and participates in important craft festivals like the International Folk Art Market in Sante Fe, USA.

(L to R: Vankar Dayalal Kudecha at the loom; his creation)

Vankar Murji Bhai
Vankar Murji has been a weaver for nearly 24 years, having learned the art from his father who was also a part of the 1960s Bhujodi Weavers’ Co-operative. Uneven economics of the business almost led Murji Bhai to give up weaving altogether. However, a trip to UK on an artist exchange program helped him see the impact and appreciation for India’s textile arts and that led to a resurgence in his interest in the craft. He went back to weaving and today he runs a successful enterprise and has carved a niche for his work in the market with his brand ‘Miri’, inspired by the rare dhablo weaving method of the same name. 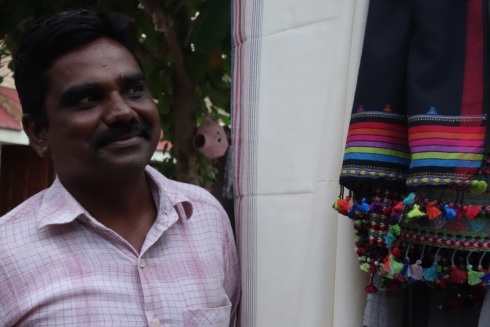 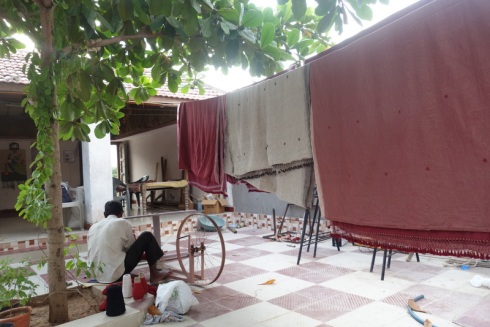 (Clockwise L to R: Vankar Murji Bhai next to his creation; yarn spools; handwoven fabric at the weavers compound)

Vankar Devji Premji Bhai
Vankar Devji Premji Bhai may sound like one person but the name actually denotes the father-son duo of Vankars Premji Bhai and Devji Bhai. Together with Premji’s younger son, Chamanlal, they have worked tirelessly to keep Kutch weaving in the mainstream. The family has won several accolades for their skills and contributions to the craft. Premji Bhai is a pioneer of the 1960s Bhujodi Weavers’ Co-operative and the recipient of the prestigious Sant Kabir Award. While Devji Bhai, the older son, is an award-winning weaver as well as a bhajnik, or a community bhajan singer, the younger son, Chamanlal is active in reviving older weaving styles and has worked extensively with the weavers of East Kutch who specialize in Tangaliya weaving – a beautiful and complicated weave.

(L to R: Devji Bhai, the weaver and bhajnaik; a handwoven shawl)

Vankar Vishram Valji
A veteran weaver from the Bhuj region of Kutch, Vankar Vishram Valji is the patriarch of a family of weavers that includes his six sons. A progressive artisan, his family was part of the famous Bhujodi Weavers’ Co-operative in the 1960s that helped put Kutch weaving into the mainstream markets. Valji Bhai is a prolific weaver and well-known for the intricately patterned dhablo or shawl that won him the President’s Award in 1972. Led by his son, Shamji Bhai, an innovative weaver himself and one of the early adopters of kala cotton, Valji Bhai’s family has worked on the craft to carve a special niche for themselves with designers and connoisseurs.