Earlier, this article erroneously mentioned that the Kerala tribal style of sari was worn by the Nair community all over Kerala. This has now been corrected to the tribal community from North east Kerala (including Wayanad and Palakad).

The traditional sari is a thing of wonder. It showcases the skills of handloom workers — its weave and fabric indicating its geographic region. There is no such thing as the Indian sari: it is a collection of beautiful fabrics and textiles across different Indian states, each of which have their unique way of draping the six yard.

“In the North-East, Assam is a major sari-producing centre. But the Assamese sari, though it’s called a sari, is actually a two-piece garment,” said Shilpa Sharma, co-founder of jaypore.com, a website that features artisanal craftswork all across India, and specialises in saris. “Punjab and Haryana don’t have much of a sari-wearing history (their staple outfit is kurta with a salwar and dupatta, and a top with a long skirt respectively), but the former state has now started producing phulkari saris,” she added, also revealing that Kashmir has now started reviving pashmina saris.

HuffPost India caught up with Sharma and textile scholar Rta Kapur Chishti, author of ‘Saris Of India’ who has explored the ways people wear their saris across India. “Saris were traditionally worn without pins, blouses, and even petticoats,” she said, adding that local women would also wear two saris together instead of one so their work wouldn’t be hindered (they could take long strides and squat comfortably). Of the many styles that dot the country, she disclosed 14 traditional ways of tying a sari that she uncovered, which can be interpreted in a modern way by any any woman as the ultimate style statement. Read more here.

India – This Father’s Day gift a bar, or go for designer apparel and accessories

Father’s Day is turning out to be fun with so many interesting options for gifts. No more is it daunting to pick a gift for the Male of the species. It is raining gifts for men. Check out the list here for Delhi, Mumbai , Kolkata. Jaypore, the online retailer too has lovely silver cufflinks. And Italian brand Corneliani has the best ties and cuffs.

All seemed quiet from a distance at a still green stretch in Delhi’s Nizamuddin East. Someone familiar with the city will know how difficult it is find a place that’s quiet enough to hear the sound of their inner voice. In the cosy depths of a palatial bungalow, not a sound more than that of soft giggle and chatter of a bunch of women with yards of fabric on their hands, could be heard. They stood around saris  stacked and strewn. Rta Kapur Chishti, a textile scholar and author deftly pleated, draped and converted nine yards of unstitched fabric into runway ready dresses. She peppers her talk with anecdotes.

“Imagine the plight of a bhodhro mahila from Kolkata landing in Mumbai in her chador sans blouse in the 1860s. She must have been swept by the need to preserve her style even as the glamour blinded her,” Chishti says  about Gyanodanandini, Rabindranath Tagore’s sister-in-law, who single-handedly gave sari its modern-day avatar. She took a liking to the Parsi style of wearing structured sari and fused it with the Bengali form. For the final touch, she changed the direction of her pallu, wearing it on her left shoulder instead of the right. She didn’t stop there. Read more here.

20 websites to shop at

The folks at Jaypore have a great eye for handcrafted souvenirs that you’ll proudly hold on to. Think antique jewellery from Rajasthan, handmade clothing from Auroville, crisp eri silk scarves from Nagaland and quilted jackets via Orissa. Read more here.

Vijayakaskhmi Nachiar has been coaxing her weavers at Pollachi, a pretty town south of Coimbatore, to craft swatches of superfine muslin. It is a forgotten art that needs painstaking effort today and a whole day at the loom coughs up barely a few inches of muslin.

By October, Nachiar and her husband, Mani Chinnaswamy, hope to fashion enough muslin stoles to display at the sustainability-centric Textile Exchange in Mumbai. Muslin once draped the ordinary man walking on the street in those 19th century woodcut prints. But in a modern lifestyle store, the nearly extinct textile deserves to be now priced, says Nachiar, as much as say, Mongolian fine cashmere.

“India is absolutely ready for worldclass handloom products,” says Chinnaswamy who, along with Nachiar, runs Ethicus, a line of organic cotton merchandize. “We talk so easily now about Louis Vuitton or Rolls Royce. We should be willing to put a high value on our own heritage. And remember, we have the youngest market in the world.”Read more here. 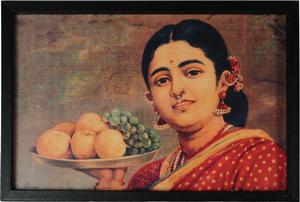 Chances are that almost every home in India has a reproduction of a Raja Ravi Varma painting, whether it is Saraswati in a white-and-gold silk sari with her veena and peacock at her side or the famous oil on canvas of Lakshmi in a bright vermillion sari. While the original paintings are owned by art connoisseurs and those who can afford it, Jaypore, an online portal for exquisite artisanal products ranging from apparel to jewellery and Indian art to home décor, introduces a collection of canvas prints of Raja Ravi Varma’s paintings and coasters and magnets that feature prints of the artist’s work created during his stay at the Lakshmi Vilas Palace in Vadodara. The Museum has also come on onboard exclusively with Jaypore.com, to showcase their Raja Ravi Varma collection

This collection has been specially commissioned by the Maharaja Fateh Singh Museum to allow people to have access to Indian art history, says Manika Dhama, chief storyteller at Jaypore.com. “The museum is part of the palace built by the Gaekwads of Baroda. In the 1880s, Ravi Varma was invited to paint the portrait of Sayajirao III and a special studio was set up. A lot of Ravi Varma’s work was created during that time with patronage from the family,” she says. The canvas prints come with a certificate of authentication from the museum and gives the buyer details like the name and method of painting. Read more here. 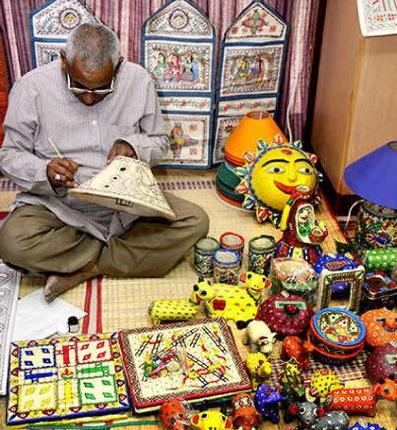 Two years ago, Ganga was a worker in a small textile unit in Bihar, trying to make ends meet with her monthly salary. But today she earns earns ₹3-4 lakh a week selling Madhubani painted handbags online on Limeroad.com.

At one point conditions were so bad that Gupta had to leave home to work under the Centre’s NREGA scheme, through which he earned a paltry amount daily. Now he sells sarees worth ₹1 crore per annum on online platform Jaypore.com. Read more here. 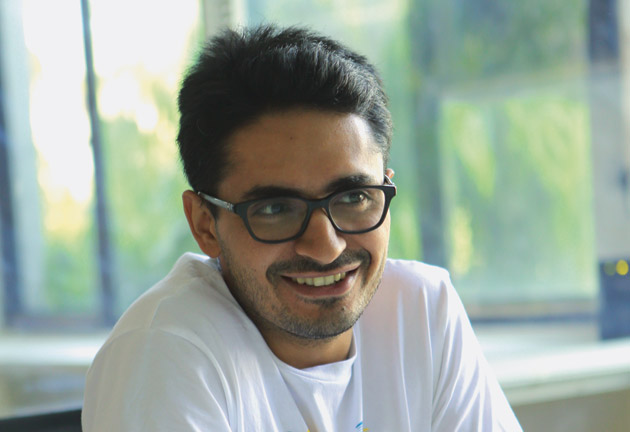 The Dongria weave had become a vanishing art form, with their products rarely selling outside the community. However, an online retailer, Jaypore.com, has made it possible for Dongria embroidered saris and shawls to sell in global markets at what would appear to most Indians to be exorbitant prices. The dwindling community of Dongria Kondh weavers is delighted. Read more here.

e-Commerce is a fast growing business in India. And therefore requires a thorough business approach. That was the topic for the 19 participants at the two-day e-Commerce Summit organized by Women on Wings in Delhi. On 25th and 26th May, the participants took on a journey by expert Ellen Oord and guest moderators Amit Gupta and Shilpa Sharma showing them the chances and challenges of starting an online business. Read more here.

The ubiquitous steel lunch box has now got a modern twist. Enameled Kitchenware, a stunning new collection designed by Delhi-based Risham Chawla, is available on Jaypore—the online store that sells unusual jewellery, saris, art pieces and home decor items. Launched last July, the collection includes lunch boxes, kadais, assorted spoons, tea sets and bowls. Their bestseller —masala dabbas. With most of the items in the collection already sold out, the response has been nothing short of impressive. Read more here.

{Store Feature} Jaypore – The Best of India to the World 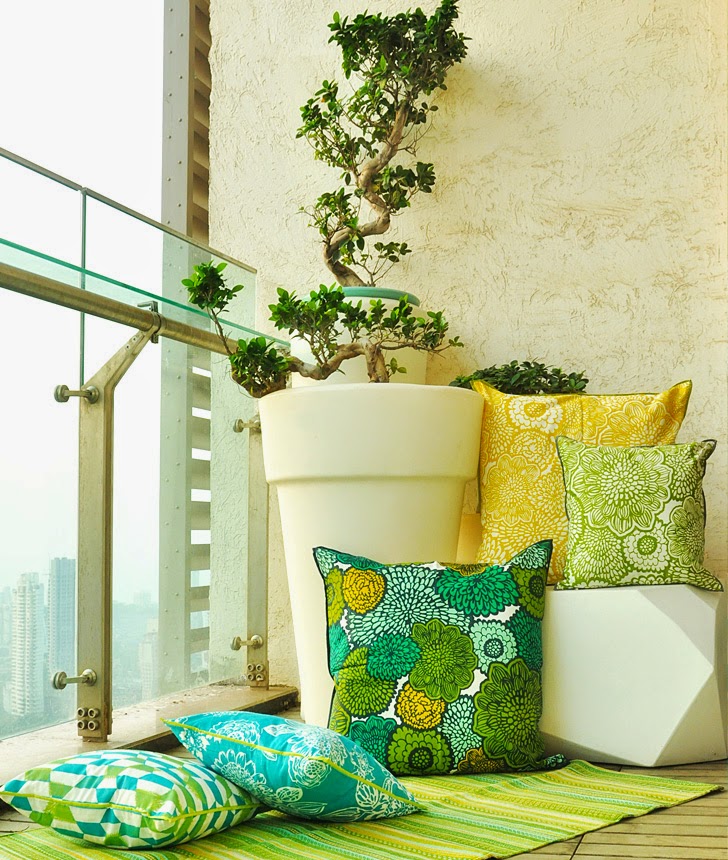 This is a store that most of my readers are probably acquainted with. Nevertheless, I wanted to know their story, and I thought it would make a good read for you too! I have long been a fan of this delightful shopping experience called Jaypore, and I absolutely love the quality and the unique designs they stock!

Jaypore was established in 2012 by Puneet Chawla, Shilpa Sharma and Aarti Jesrani. I was fortunate to interact with Aarti, who shared their story. Read more here.

Premium coffee that can be traced back to the plot of land where it was cultivated; fabrics that speak of sophistication and also their creator; traditional jewellery inspired by motifs from neighbouring countries…

A new webstore, Jaypore.com offers all these and more at the click of a mouse. At the online-only store that started its Indian operations in January this year, the accent is on wearable luxury and premium products, each of which comes with a story. For example, the story of Medha Bhatt. Inspired by artisans in Kutch, Medha makes traditional patchwork appliqué art out of textile scraps under her brand The Forest Floor. Read more here. 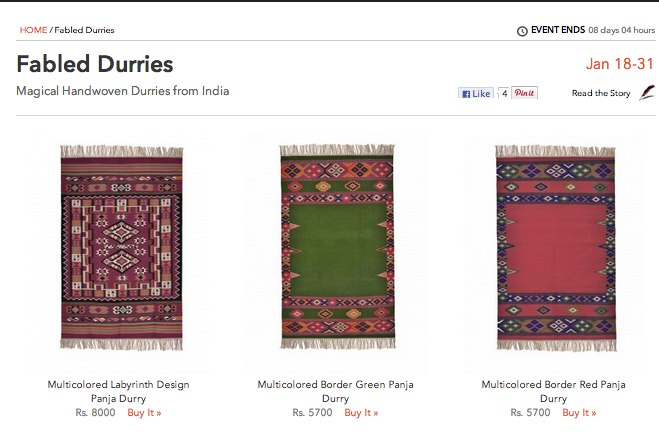 Much of India’s truly unique and beautiful products remain undiscovered, underexposed and that too by our very own consumers here in India. While companies like FabIndia and Good Earth have done a great job in exposing high quality, unique and beautiful Indian products, none of them are particularly available to the masses, especially online.

Jaypore is a niche attempt to bring the best of India to the world. The Delhi based startup aims to bring discovery to the designs from artisans and craftsmen from all over India.

Started by Puneet Chawla (ex-Product Manager at Exclusively.in/Sher Singh, Redbus and Naukri), Shilpa Sharma (ex-Head of Product Development and Buying for FabIndia), Aarti Jesrani (ex-Head of Marketing at burrp!) and Deap Ubhi (as an angel investor/director), Jaypore is an online store that showcases to customers India’s most beautiful products. Read more here.

For enquiries, write to us at iheart@jaypore.com