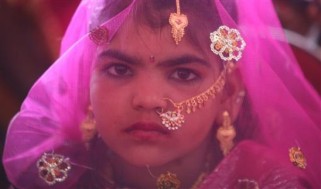 India is a land that worships goddesses such as Saraswati, Durga, Laxmi. Ever seen them wear a ghungat, or the veil?

Never. Then where did this culture of covering a woman’s head and face come from?

The ghungat, yet another symbol of Indian history, in a way retells the story of the various invasions of India. It is yet another custom that got left behind, and is still practiced long after the invaders have left .

The practice of the ghungat is said to have come about during the Muslim invasions of India. It is said that in the 14th century a Muslim invader, Alahuddin Khilji, was visiting the Rajput king Rana Ratansen of Chittor Garha. The guest wing of the palace, where the Mughal ruler was staying, was right across the queen’s quarters. One day the Mughal ruler was strolling outside his quarters when he saw the reflection of Queen Padmini’s uncovered face in the lake that divided the two quarters. He fell in love with her breathtaking beauty and planned an attack on Chittor Garh to win her. On his return he only finds the ashes of the queen, who decided to burn herself than to submit to his lust. From then on, women of Rajasthan and the surrounding states, started to cover their faces in the presence of anyone outside their immediate family, sometimes even members of her own family.

Clearly, India is a repository of customs and rituals that have stayed long after the stories, that brought them into practice in the first place, became extinct or were forgotten!