We are no more than a moving row of magic shadow-shapes that come and go round with sun-illumined lantern held in midnight by the Master of the Show.

—From the Rubaiyat of Omar Khayyam (12th century) 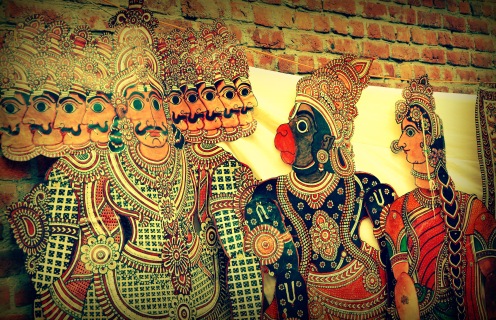 Known as Tholu Bommalata in Andhra Pradesh (Tholu -leather, Bommalata – puppet dance), leather shadow puppetry was a widespread performance genre in villages and towns since as early as 300 B.C., till recent times. These shows had something for everyone, divine epics, like Ramayana and Mahabharata, for the religiously inclined and comic relief for young and old alike. 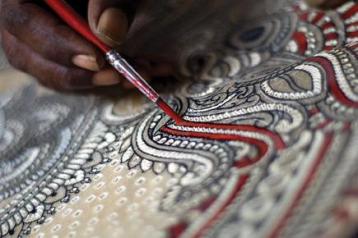 These puppets were traditionally made of the leather of deer, and are now made of goat hide. The leather puppets of Andhra Pradesh are larger than the ones found in Kerala, Karnataka and Maharashtra, and can reach up to eight feet in height. Even Andhra Pradesh boasts of two other kinds of shadow puppetry – Sutram Bommalata (string puppets) and the Koyya Bommalata (wooden puppets). But the leather puppets, with their jewel like glow owing to their transparency, are more popular.

The process of making these puppets is a laborious one. The artist first draws an outline with pencil or charcoal to cut out the limbs of the puppet in leather, mostly with the help of existing prototypes. These are then colored with layers of vegetable dyes which are good to maintain the translucence of the leather. Traditionally, only two colors were used – red and black; now the availability of chemical colors has allowed artists a wider and more vibrant color palette, while still retaining the translucence of leather. Next is the ornamentation, for which the leather is punctured with tiny perforations for light to pass through, giving the puppet an effect of glittering jewels. Wooden sticks attached to the backs of puppets are used to set them into motion. Earlier with the use of oil lamps, and today with more convenient electric lights the puppet’s animated shadows on a white screen, accompanied by poems, music and simple sound effects, tell rich folklores of the past, holding the audiences rapt.

Over the past few decades, however, the advent of the modern entertainment industry has resulted in a heavy decline in patronage of folk puppetry. As a result, many traditional puppeteers have either left the art form for odd jobs or have taken up work as farm labor. There is still a small number that has started making lampshades, hangings and other home accents as a medium to keep the art alive and as a source of stable livelihood.

Lamenting the fact that there are no takers for the ‘art of telling lores through puppetry’, rendering the ‘craft of making puppets’ lifeless, artisans create these products in the hope that they will keep the art of storytelling alive in urban homes!

Like Loading…
← For Art’s Sake: An Afternoon at the India Art Fair, Delhi
→ The Geometric Genius of Toda Tribal Embroidery